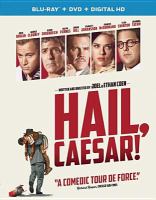 Almost unwatchable. Only better as worse by the Holmes Watson fiasco with Will Ferrall and John C Rielly. I love the Coen Bros, but this demands apology.

Boring! I wanted to give it a chance (as it is created by the infamous Coen Bros) but I couldn't.

Quirky movie, some laugh out loud moments. But I thought the film should have been better, considering it's cast. I didn't love it, I didn't hate it, just down the middle for me.

This Coen Brothers movie is composed of several pieces, and the film does not make much of an attempt to fit those pieces together. However, the individual pieces are so much fun that the movie ends up being an utter delight anyway. Set in a movie studio during the height of Hollywood glamor in the 1950s, Hail, Caesar! includes bits of fictional movies and spoofs of actual hit movies from the era. The film gives you a send-up of swords-and-sandals religious epics with George Clooney as a Roman who encounters Christ, there’s an entire song-and-dance from Channing Tatum and sailors who will miss “dames” while at sea, Scarlett Johansen plays an Esther Williams-analogue in a really rather impressive synchronized swimming show, to name just a few of the charms of this movie. Josh Brolin plays the hard-as-nails studio President, keeping a lid on the chaos as he forces the studio to keep functioning as a prosaic business behind all the glitter.

Boring. Probably the worst movie ever with George Clooney in. Is Mr. Clooney really that desparate for money after being the new father?

I didnt like this movie in theatres it was horrible.

A welcome send-up of today's anti-democracy, neoMarxism, a cheap ideology popular among the faded, sleaze-bag, has-been celebrities like Clooney, who was especially well cast - probably too thick to appreciate the irony - and the unaccomplished, self-apptd experts and bottom feeders exerting their twisted influence because working people are just too busy working and achieving to stop them to drum them out of town. But this could change at any time. We live in hope.

Absolutely hilarious if you like the quirky, dark humor that's the trademark of Coen brother films. Hail Caesar! is both a send-up of - and tribute to - the old Hollywood studio system and its extravagant productions.

A special tribute to movie industry in the 50s old big studio days, both nostalgic and satirical. It's entertaining, peppered with humor, sweetened by stock characters, condensed to let movie buff savor one day;s life behind the silver screen then.

Rabbi: What? And a dog? A collie, maybe? God doesn't have children. He's a bachelor. And very angry.

Catholic Clergyman: No! No! He used to be angry!

Rabbi: What? He got over it?

Protestant Clergyman: You worship the god of another age!

Catholic Clergyman: Who has no love!

Rabbi: Not true! He likes Jews.

Uh, is it hard to dance with all them bernanners on your head?

The "Hail, Caesar! critics part 1 of 2:
Now, "Hail, Caesar!" is a prestige picture; our biggest release of the year. We are devoting huge
resources to its production in order to make it ﬁrst-class in every respect. Gentlemen, given it's enormous expense we don't want to send it to market except in the certainty that it will not offend any reasonable American, regardless of faith or creed. Now that's where you come in. You've read the script; I wanna know if the theological elements of the story are up to snuff
....
-Well. The nature of the Christ is not quite as simple ... as your photoplay would have it. ... It is not the case simply that Christ is God, or God Christ.
--You can say that again! The Nazarene was not God! He was not not-God. He was a man!

The "Hail, Caesar! critics part 2 of 2:
-It is the foundation of our belief that Christ is most properly referred to as the son of God. It is the son of God who takes the sins of the world upon himself so that the rest of God's children, we imperfect beings, through faith, may enter the kingdom of heaven.
So God is. . . split?
-Yes. And no. There is unity in division. And division in unity. ...
I'm not sure I follow, Padre.
-Young man, you don't follow for a very simple reason: these men are screwballs. God has children? What, and a dog? A collie maybe? God doesn't have children. He's a bachelor. And very angry.
-No, no. He used to be angry!
-What, he got over it?
-You worship the god of another age! Who has no love!
Not true! He likes Jews.
-God loves everyone! God is love. God is who is.
This is special? Who isn't who is?

Some good quotes in IMDb already except this quote on the movie scene "A Tale of the Christ:"
This man was giving water to all. He saw no Roman and he saw no slave. He saw only men. Weak men and gave suckle. He saw suffering which he sought to ease. He saw sin and gave love.
-Love, Autolochus?
He saw my own sin, Gracchus, and greed. But in his eyes, I saw no shadow of reproach. I saw only light. The light of god.
-You mean, of the gods.
I do not, friend Gracchus. This Hebrew is a son of the one God, the God of this far-ﬂung tribe. Why shouldn't God's anointed appear here, among these strange people to shoulder their sins. Here, Gracchus. In this, sun-drenched land. Why should he not take this form. The form of an ordinary man. A man bringing us not the old truths. but a new one. A new truth. A truth beyond
the truth that we can see. A truth beyond this world. A truth told not in words but in light. A truth that we could see if we have but... if we have but...
-Cut. Cut! Faith.