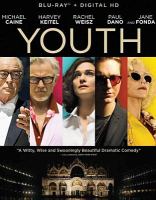 The two great songs are at the end of the movie and the end credits. Arresting motion visuals and artistic shots set in very scenic locations, music and character arcs that just makes this interesting to watch as an art-house type of movie. Could not connect much with the story, but I felt so entranced in the world it is visually creating that I just enjoyed the escape.

Beautiful cinematography and music. A slow build-up to the ending that was quite moving, but worth it.

Because Italian director Paolo Sorentino's films are often about beautiful people in beautiful places (His prior film was "The Great Beauty."), it can be easy to dismiss him as a shallow. But as someone said, "It is only shallow people who do not judge by appearances." Set an alpine spa/hotel, it's largely about the friendship between two old men, a conductor/composer (Michael Caine) and a director (Harvey Keitel). Caine's daughter (Racel Weisz), who is married to Keitel's son, is also there, as is a famous actor (Paul Dano), and, briefly, Miss Universe. Despite all its conversations about life, work, art, and again, it's not particularly profound, but it's so visually ravishing that you don't really mind. Jane Fonda has a small role and musicians/singers Paloma Faith, Mark Kozelek, and Sumi Jo all make appearances.

I have watched YOUTH five times and find a different story in it each time. The cast is perfect, the soundtrack has one of the better love songs ever. This movie is not for the hard of thinking or feeling. While some complain the plot moves slowly, well, that's life, isn't it. It isn't an action movie.

Beautiful cinematography and a great cast but a pretty long & boring movie in general.

Flawless acting, cinematography (nudes and exotic locations as the spectacular Alpine resort,) glorious music and a powerful emotional message on friendship and family concerning a pair of buddies who were in-laws and both widowers in their twilight years. Michael Caine and Harvey Keitel were naturals in their roles ... that Jane Fonda was perfect (once the character was mentioned, Fonda immediately came to mind well before her appearance in the film.) The South Korean soprano Sumi Jo who performed the original score "Simple Song #3" by David Lang was worthy of an ovation or two (see "Videos".)

Why doesn't the library have the DVD that isn't Blu-ray?

They offered me a TV series in the Mexico with three-year contract. An alcoholic grandmother who suffered a serious stroke. A character has got real balls, but with the money... I can pay for Jack's drug rehab... I can pay off the debts of my idiotic future ex-husband...
===
53 years ago, if it weren't for me... You'd still been crouching under sub-producers desks. I pulled you out from under those big fat producers underpants... I made you an actress.
- You little shxt. I was just fine inside those producers underpants. You know why?
Because I wanted to be there. I don't owe anybody anything. I did it myself.
===
You're the one who doesn't understand it any more. Because you're old, you're tired... You don't know how to see the world any more, Mick. All you know how to see is your own death, which is waiting right around the corner for you. Your career is over. I'm just telling you flat out because I love you.

So who is the most talented actress you've ever worked with, Mr. Boyle?
- Brenda Morel, without a doubt. A genius! She couldn't have read more than two books in her life... And one of them was an autobiography... Written by a ghost writer, naturally.
A genius, in what sense?
- If you know how to steal... You do not need training. Stealing becomes your education. That's how Brenda is. Even when, thanks to my films, she became a diva... She never forgotten where she was from. The street was her real home. And that's where she stayed, stealing... Everything. Which is how she created such
unforgettable characters. And won two Oscars.
===
... when you're young. Everything seems really close. ... now... And that's what you see when you're old. Everything seems really far away.
===
I want to tell about your desire, my desire. So pure, so impossible, so immoral... But it doesn't matter because that's what makes us alive.

Many of the film's excellent quotes are on IMDb:

Some are not, as this exchange between father and daughter P2 of 3:
Believe me, Lena. I can understand you. Really, I can.
- You can understand me? Like hell you can! Mommy would've been able to understand me. Mommy found herself in the same situation... I'm in now with you not once, but dozens of times... She was pretending not to know. You had a stream of women, but she just kept going... Not just for us children, but above all for you. She loved you and so she forgave you. No matter what happened, she still wanted to be with you. But who were you? Who? It's what I've always asked myself. You never gave anything... not to her, not to me, nothing.

exchange between father and daughter P2 of 3:
You gave everything to your music. Music, music, music! There was nothing else in your life. Only music and arrogance. Never a caress, never a hug, never a kiss, nothing. You never knew anything about your children. You never knew if we were happy, if we were suffering. Nothing. Everything was on Mommy's shoulders. At home the only thing you would say to her were the two words: "Quiet, Melanie." And Mom would explain to us: "Quiet, Daddy is composing". "Quiet, Daddy is resting, he has a concert tonight." "Quiet, Daddy is on the phone with someone important." "Quiet, Daddy has Stravinsky coming to the house later tonight". He wanted to be a Stravinsky, but he never had a single drop of his genius. "Quiet, Melanie!" Were the only two things you knew how to say.

exchange between father and daughter P3 of 3:
You didn't know the first thing about my mother! You never bothered to take care of her. And even now, you haven't brought her flowers for ten years. And that letter! Do you think Mommy never read it? Well, you're wrong. She found it and she read it and I've read it too. But you probably don't even remember that letter. But we do. The letter we found in which you professed your love for another man. Mommy had to enjoy that humiliation too. "My necessary experimentation in sexual matters" as you put it. So your musical experimentation wasn't enough for you. No! You had to experiment in homosexuality too! You didn't give a fuck about all the anguish you've caused her. So don't you come telling me that you can understand... Because you don't understand a fxcking thing.

There are no notices for this title yet.